What's in a Name?

What's in a Name?

When I was in high school, one of the most unpleasant things I had to deal with (other than math, yuck!) was the SATs. The only thing worse than taking the SAT two times, is taking the SAT three times. But heck, at least I took the SATs less times than I did my driving test. My testing challenges aside, perhaps if I had the knowledge of root words that I have today, I might have been able to shave off an exam or two. While many of you are probably in the same boat as me and the SATs are a ways behind you, it’s never too late to increase your root word vocabulary!

What on earth am I talking about? (You’ll see!) Does this have anything to do with horticulture? (Absolutely!) Have I just gone off the deep end? (Can’t rule anything out!) We are going to take a look at plant names, specifically, their botanical names. 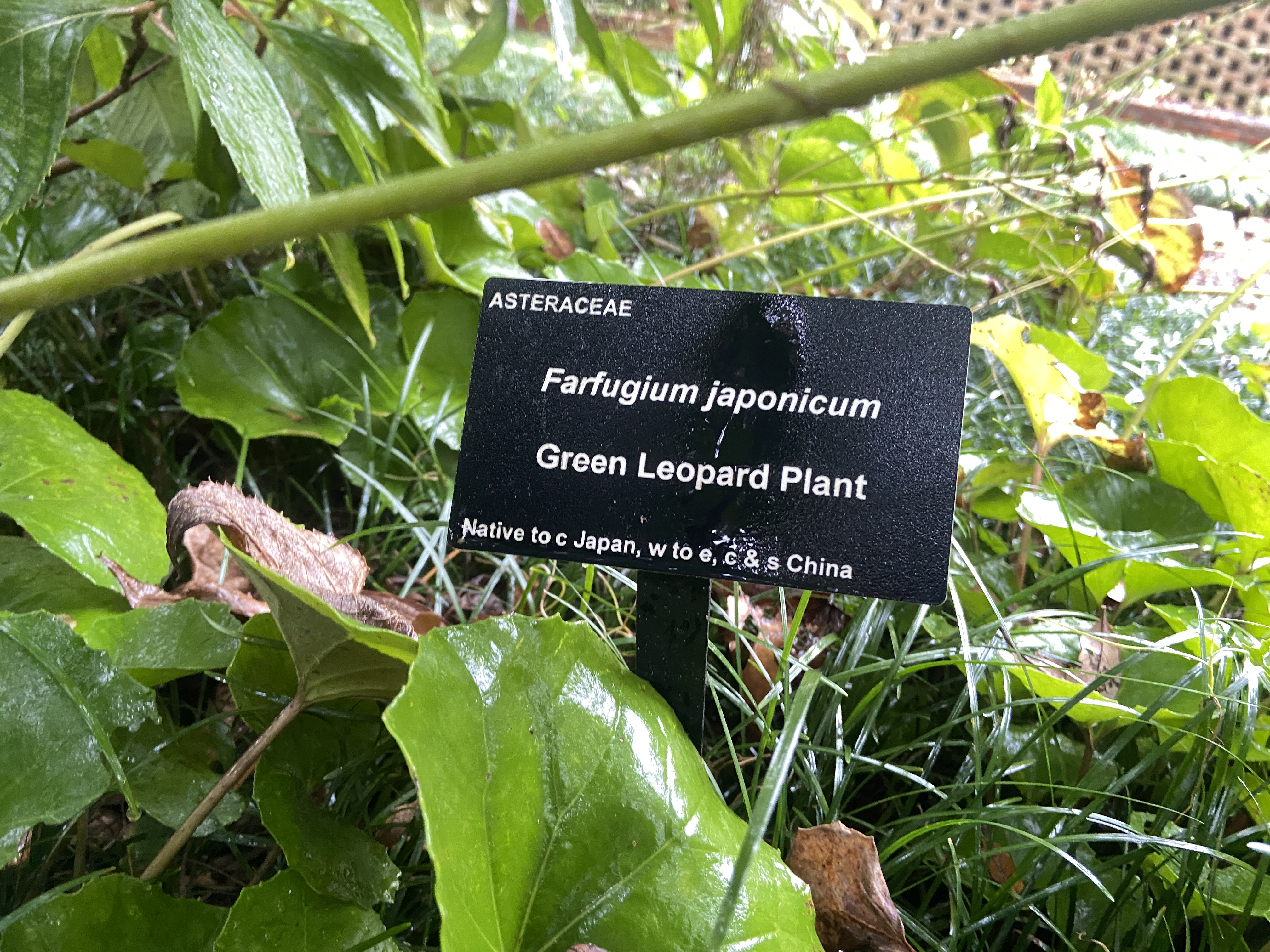 In a broad manner of speaking, plants have two names: their botanical name and their common name. I know people get frustrated and say “Why can’t we all just call it by the common name? It would be so much easier than this hard to pronounce jumble!”. To put it simply, not everyone in the world speaks English, so their common names for the same plant would be different in their own language. Not only that, but common names vary from person to person and region to region - what a headache! My favorite example is Sansevieria, which I grew up knowing as a snake plant, but is also known as mother-in-law’s tongue. Now that’s a rough switch from place to place! 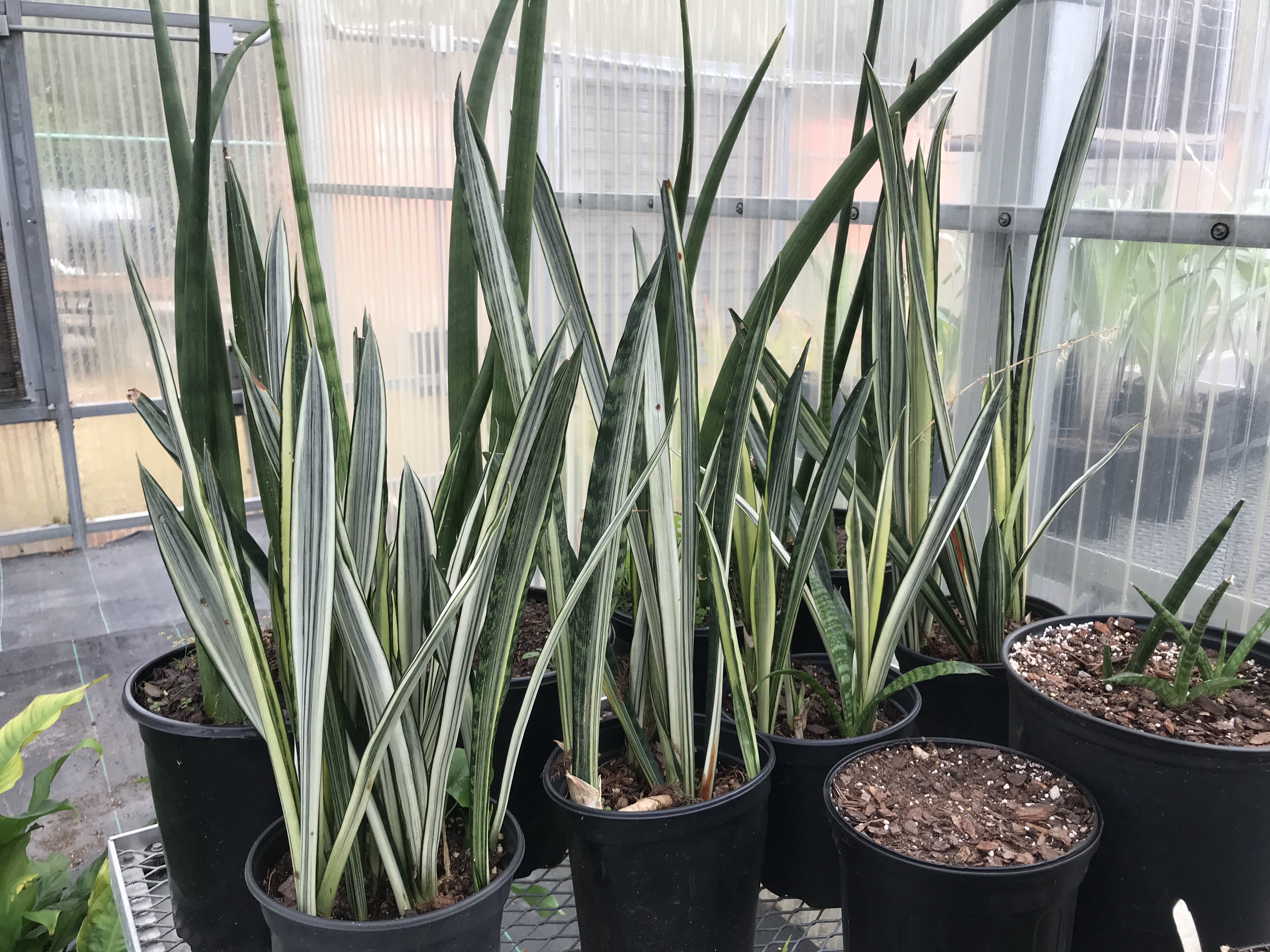 So why am I droning on about what is arguably one of the most boring topics ever? Because, if you can make it through this post, you will be decoding botanical names and making sense of all of that mumbo-jumbo in no time! To start, let’s look at a few plants and, of course, their botanical names. For the most part, our attention will be on the second italicized word, the specific epithet (commonly known as species), but we will wind up focusing on other parts of the botanical name too. Hold on tight, you’re going to be a plant name pro before you know it! 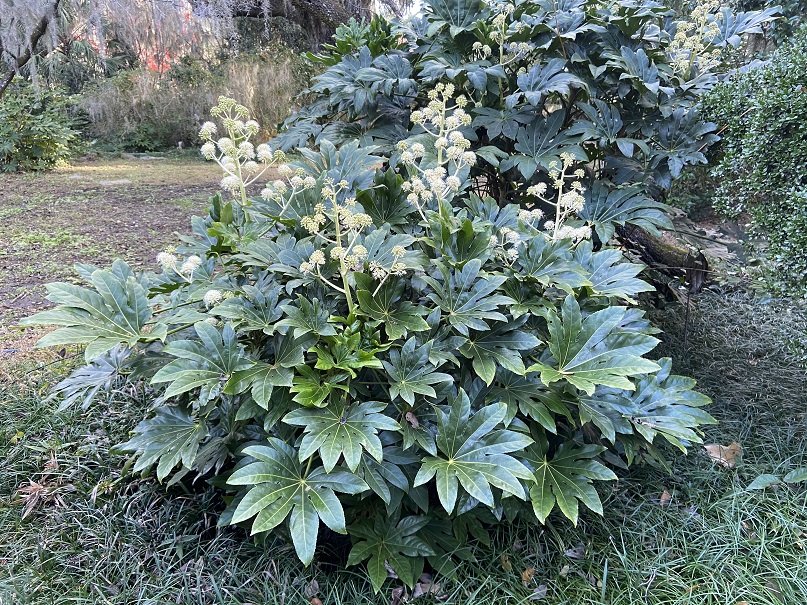 Let’s start with something fairly simple, Japanese aralia, or Fatsia japonica. The second word, or the specific epithet is “japonica”. By looking at the word, many of us are likely to see the word “Japan”. Much like the common name implies, this is a plant that’s native range includes Japan. 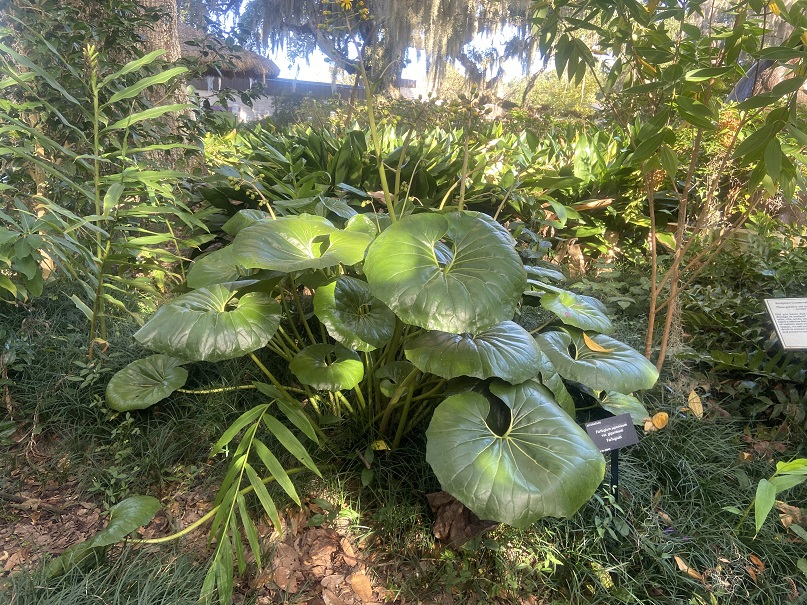 Taking a note from our last plant, we’ll take a look at farfugium, or Farfugium japonicum var. giganteum. While this name may feel like a bit of a doozy, there is a wealth of identifying information contained therein! One word will hopefully feel familiar: “japonicum”. As you can guess from the last paragraph, it indicates it as being from Japan. However, you will also notice another italicized word following “japonicum". That word is “giganteum”. As the image above may lead you to see, this farfugium is gigantic, especially its leaves! The botanical name certainly helps get that point across. 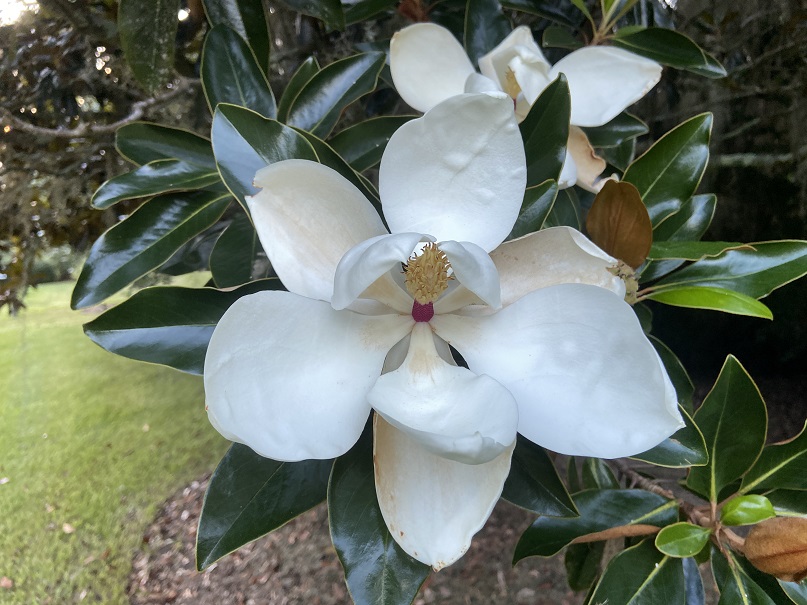 It’s hard to think of the South and not think of southern magnolias! Magnolia grandiflora is a great name to break down. The word “grandiflora” is the combination of two words: “grandi" and “flora”. “Grandi” sounds like grand and means big or large. “Flora” means flower. Put them together and you have “big flower”. If you’ve ever come face to face with one of these beautiful, prehistoric looking flowers, it’s easy to see how the botanical name is a great fit. 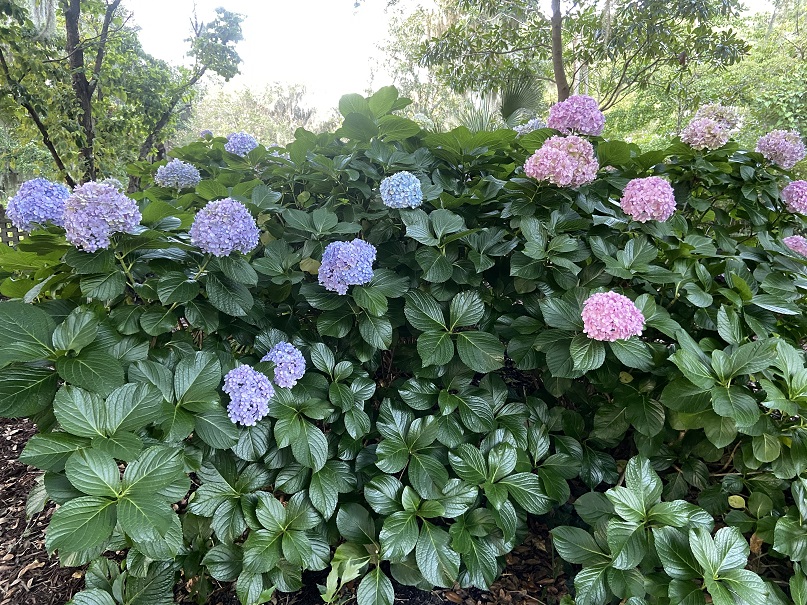 We find another combination word in our next plant: big leaf hydrangea, or Hydrangea macrophylla. Much like the southern magnolia, this is a staple in southern gardens and comes with a suiting botanical name. The word we’re looking at here is “macrophylla”. To break it down we have “macro” as one key component and “phylla" as our second. “Macro” means large (I know, I know, so does “grandi”, but it just means we can expand our botanical vocabulary, so it’s all good!). “Phylla” means leaf. Slam those two bad boys together and we have “big leaf”. Take a peek at our featured image above and you can tell those leaves are indeed quite large! 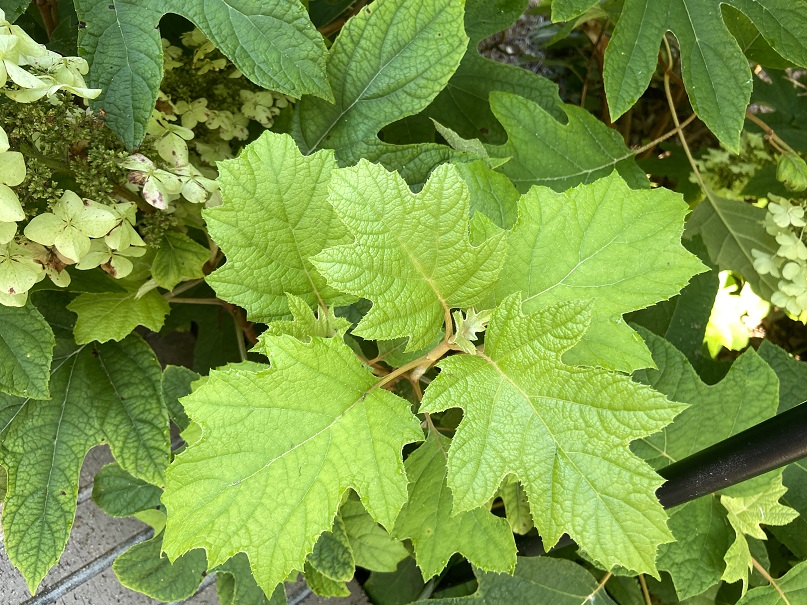 Sticking with hydrangeas, and our words packed with a punch, we have oakleaf hydrangeas, or Hydrangea quercifolia. Another wonderful southern plant to grace our list, and open our eyes to its teaser of an identifying feature! Taking a look at the word “quercifolia”, we again break it apart into two words: “querci” and “folia”. “Querci” comes from the word “Quercus”, which is the genus (or grouping) that oaks are in. “Folia” is another word for leaf. Once we unite these two, we have oakleaf, or leaves like oaks. As you can see from our above image, the foliage on these hydrangeas are definitely different from our big leaf hydrangeas (Hydrangea macrophylla) and do indeed bear a resemblance to many an oak leaf! 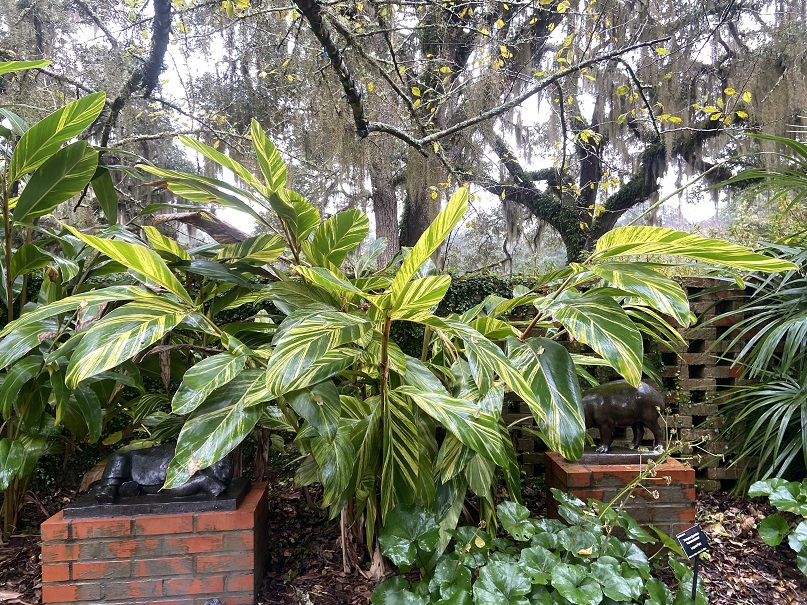 Let’s switch gears and look at words that help describe colors, and a few botanical names that highlight them. Shell ginger, or Alpinia zerumbet 'Variegata' is a great example of a plant with a lot of pizzazz, thanks to its ultra colorful foliage! The word that helps us identify this variegated shell ginger is, understandably “variegata". When you see “variegata" listed as part of a plant name, you are typically safe in assuming the plant will be a carnival for your eyes and have multiple colors, often within its leaves!

Japanese blue oak, a truly magnificent tree, is known as Quercus glauca. The first word, “Quercus” may seem familiar and is in fact the genus we referred to when discussing the oakleaf hydrangea (Hydrangea quercifolia). As far as oaks go, this one displays leaves with a different shape than our token oaks that are referred to when referencing oakleaf hydrangeas. However, our second word “glauca" does help aptly describe the foliage. “Glauca" means glaucous, which is a blue-green color. As the leaves show, they definitely fit the bill. While our focus is the leaves with this one, I could not not include a photo of its breathtaking habit. Gee whiz…! 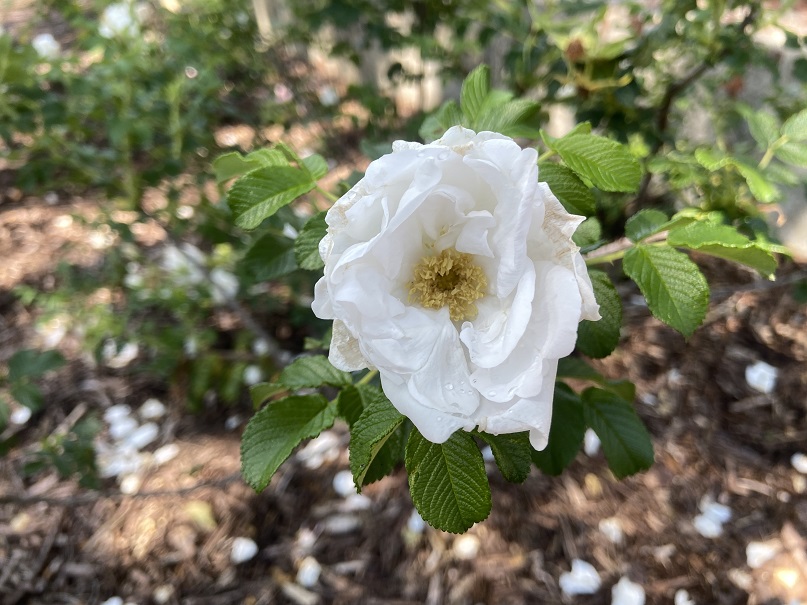 Our next plant is a simple but elegant rose. Its full botanical name is Rosa rugosa ‘Alba’. “Alba” means white. Typically it is a good assumption that a plant that has “alba” in its name is referring to something being white. In the case of this rose, we are looking at a white flower. 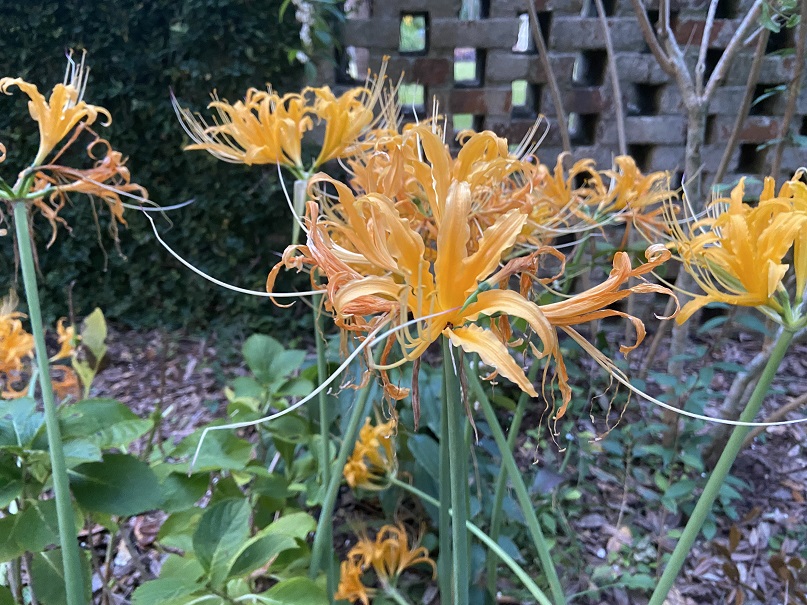 This next plant is one that is known by a few different common names and definitely exemplifies why having a single botanical name is so helpful. Golden spider lily, or golden hurricane lily, is known botanically as Lycoris aurea. The word we turn to to help us identify a trait of this plant is “aurea” which means golden and in this case, refers to its flowers. 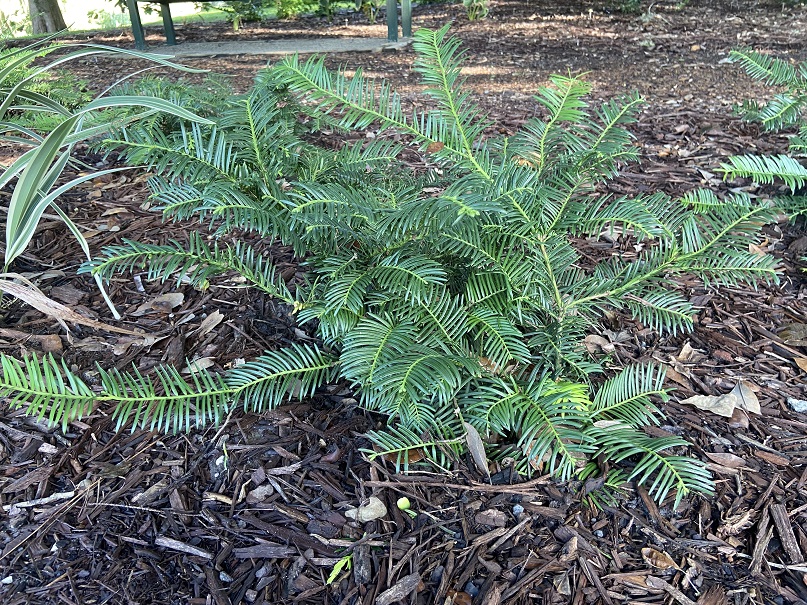 To round it all out, let’s take a look at one more plant. Plum yew are an evergreen conifer that can be a good addition to your landscape, but they can come in different shapes and sizes. Cephalotaxus harringtonia 'Prostrata' is another great example of a plant that can use its name to help identify its features. “Prostrata” means prostrate or more simply for our means, growing in a spreading or horizontal way. If you buy a plant that has “prostrata” included in its name, it’s best to assume you want to give it room to spread out, since it will likely grow wide!

On your next trip to Brookgreen, keep an eye out for plant labels throughout the gardens. As you go through, see what words you recognize and how you think it relates to how the plant grows. You may surprise yourself by how much you knew from the botanical name, without having realized it!