The South is known for its beautiful and stately live oaks (Quercus virginiana). If you've been to visit us at Brookgreen Gardens, then you surely know of our breathtaking Live Oak Allée, pictured below, lined with mature, magnificent trees. Throughout the grounds, you will notice live oaks stealing the show in many of the gardens. But one of our live oaks has begun to cause a bit of a stir! 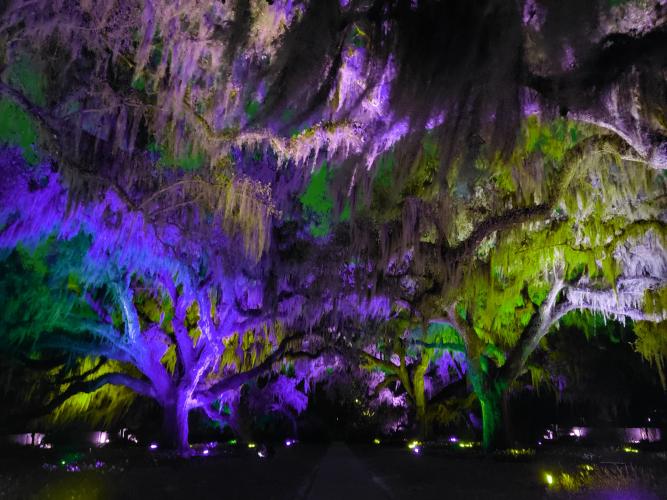 While it may be hard to notice with all the lush plantings in the Baby Gods area of the Fountain Gardens, the live oak overhanging from Caroline's Garden has started to drum up some questions and concerns. First, let me tell you that the live oak is okay, and is, in fact, better than it was a few months ago, despite its current appearance! 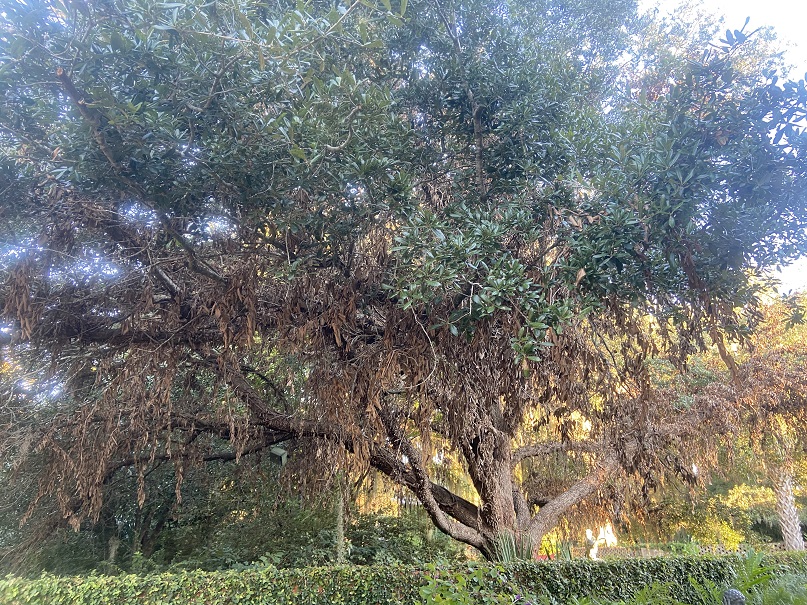 I know, I know, it's shocking to see, and it looks like the tree is in a steady decline with a ton of dieback! Fortunately, while there is dieback, it's not from the tree; it's from the tree's invader.

Climbing fig (Ficus pumila) is all around the gardens and is typically a great addition to dress up bare walls and help to create vertical interest where there otherwise would be none. While the fig works well on walls, as seen below, it can sometimes get a bit out of control. 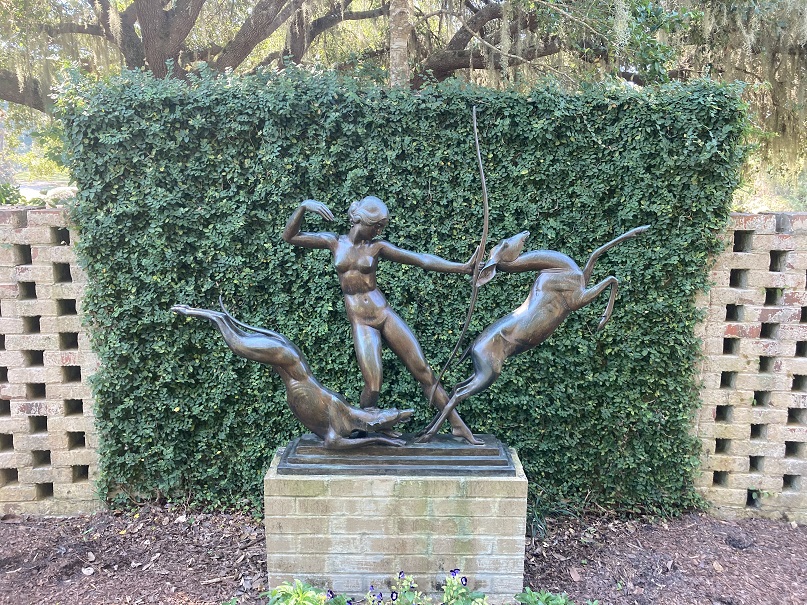 In the case of the live oak in Caroline's Garden, this was one of those times. The fig had grown a little too well, beyond its intended space and into a nearby live oak! As the fig grew, it scaled the tree and worked its way into the branches and canopy. How did this go unnoticed for so long? Simple:  Plant camouflage. The image below shows a fig stem on the left and an oak stem on the right. It's easy to think the leaves are the same from the ground (or even up close!). If it looks like a live oak and is in a live oak, then it's a live oak, right? Not always, but more on that soon! 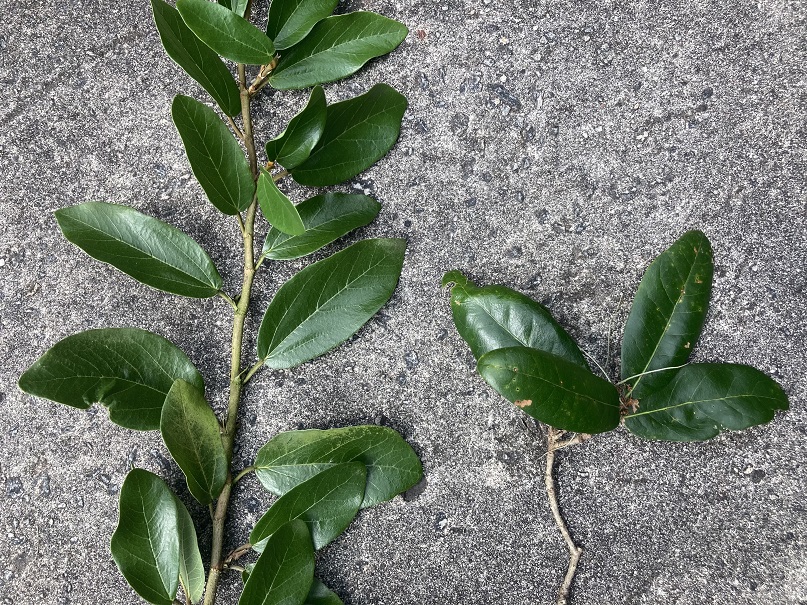 You may be thinking to yourself that the image of the fig above looks a bit different from the fig images we've already seen, and you're right. In the case of some vines, when they begin to grow upwards, as opposed to on the ground, they can enter their mature form. During this time, they send out branches that extend away from whatever structure they are growing on; also, their leaf morphology (or how the leaf looks) begins to change. In the case of the fig, it went from having small leaves (immature) to larger ones (mature), as seen below. At Brookgreen Gardens, we typically keep our figs trimmed to keep them attached to the wall, without branches growing off, and kept in its immature, little-leafed form. 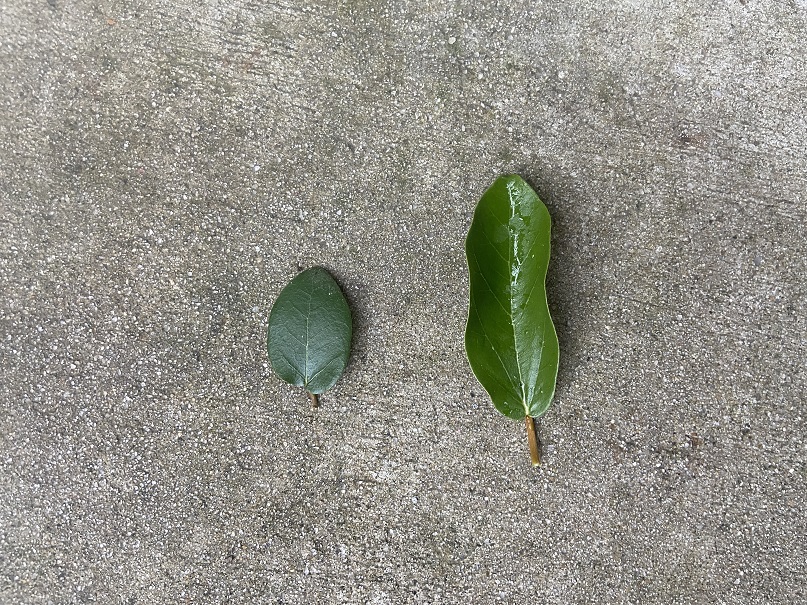 So, how did we find this plant stowaway? In the summer, it came to our attention that the lush live oak we were looking at was not quite as lush as it appeared. Hanging from the oak limbs were large, round fruits – a far cry from the acorns that oaks produce! That fruit was our dead giveaway that this oak was more than it appeared. As we quickly realized, the climbing fig had infiltrated the live oak and was growing heartily. With this sneaky plant now in our sights, it was time to remove it. 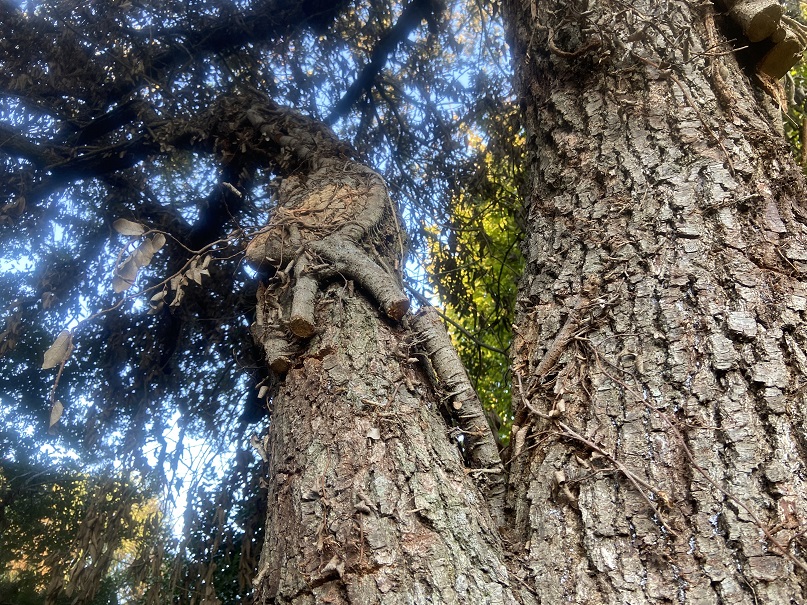 The fig had grown so extensively that its thick, woody stems had to be cut away from the oak. We pulled off all the stems within reach, but since the tree is so large could not remove everything. That brings us to today. 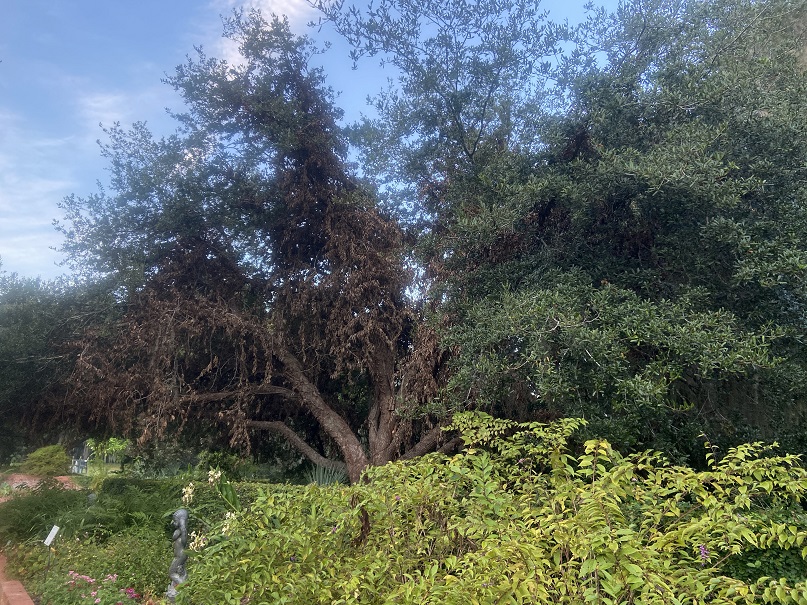 What you see in the canopy of the live oak is not oak dieback but the severed stems of the fig that we could not remove. The oak will continue to grow without hindrance from its pushy fig neighbor and soon fill the space beautifully. The browned leaves from the fig will become less noticeable as they begin to drop from the remaining stems. While the woody stems may remain out of our reach and attached to the oak, they will not cause it any harm. With the food and water flow disrupted, the remaining fig stems will wither and die and won't compete with the oak as it grows. 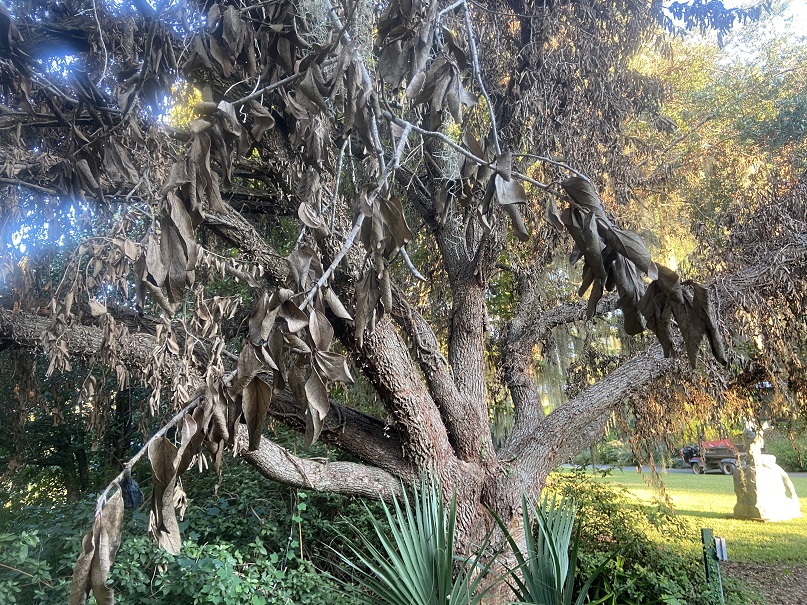 As any gardener knows, there's always work to do! We're glad we were able to catch this sneaky fig before it spread even further, and we're sure the live oak is too!

See you in the Gardens!

Brookgreen Gardens is open daily from 9:30 a.m. to 5:00 p.m.
For their safety and the safety of our animal collection, pets are not allowed, nor can they be left in vehicles inside Brookgreen.
Service animals that have received special training to assist disabled persons are welcome.