As a horticulturist in South Carolina, I have found one constant that I can always rely on - weeds. It could be the heat of the summer or the chill of winter, there are always weeds! We are in a unique climate where we get to contend with both warm season weeds, and cool season weeds. Lucky us. 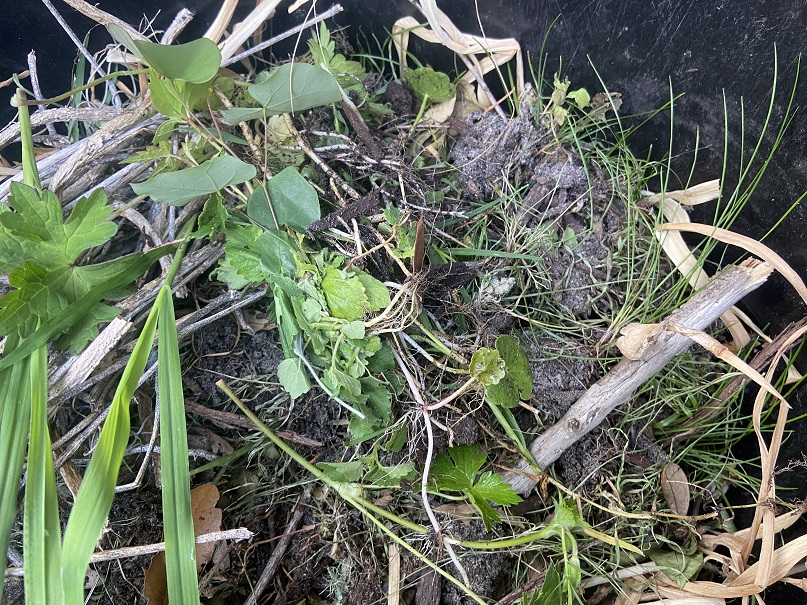 While we often use this blog to look at plants we love having in our garden, I think it’s time we take a look at ones we definitely don’t want to see crossing our garden paths. Grab your gardening gloves and a weed bucket – we’re going in!

1. Hairy Bittercress (Cardamine spp.)
Our first offender is an inconspicuous little plant called hairy bittercress. This weed is common in greenhouse settings and around garden beds. It’s a rather small weed with green, rounded off foliage. It has tiny white flowers that are barely noticeable, and small, slender, cigar shaped seed pods. Sounds innocent enough, right? 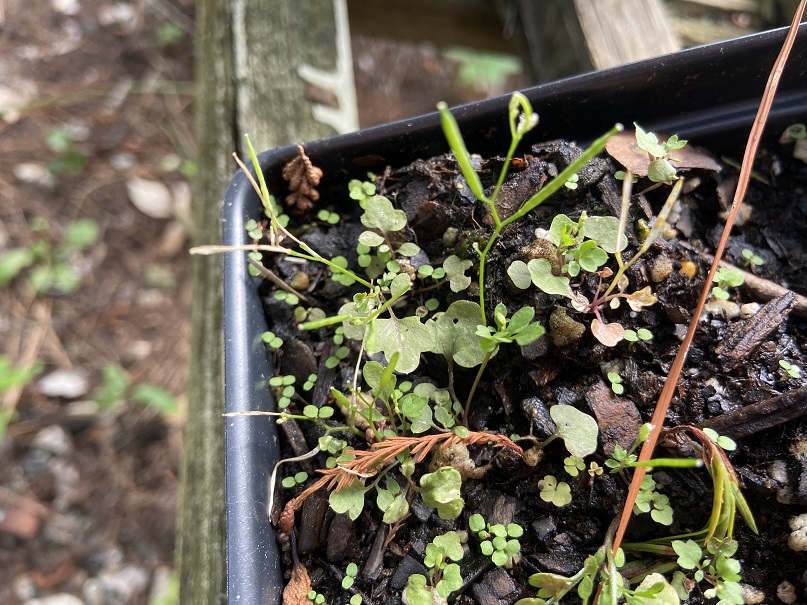 Wrong! Once these bad boys produce seeds in those cigar shaped pods we were talking about, they then start to dry out. Once the seed pods dry, the teensiest bit of pressure, be it from the wind, rain, or, say, my big clumsy hand, sets these pods erupting in a barrage of seeds. I’ve had these seeds slam me in and about the face, including landing in my mouth (likely as I was in a mid “No!”). Worse yet, there are so many of these seeds, that seem to germinate with a 100% success rate, that they easily pop up everywhere. Oh, and did I mention the seeds can stay viable in the soil for about seven years? One year seeding is seven years weeding indeed. 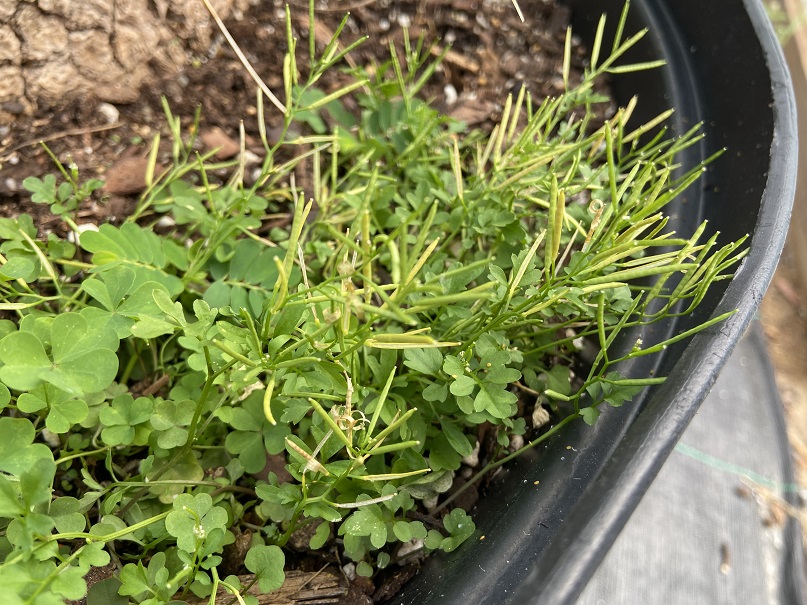 2. Virginia Creeper (Parthenocissus quinquefolia)
Our next weed to get all worked up over is a vine known as Virginia creeper. Often mistaken for poison ivy, Virginia creeper has five leaflets, as opposed to the three that poison ivy has. While we may be grateful to not break out in a rash from this one, it’s still a pesky weed all the same. 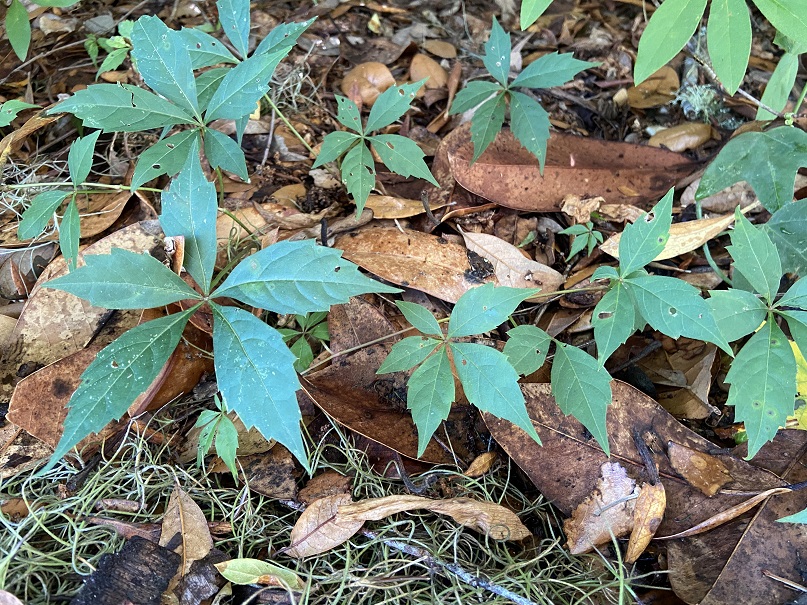 Using tendrils to attach to its growing surface, Virginia creeper can easily turn into a hassle. Allowed to grow unchecked, it can result in damage to structures, like houses, where the vines upon their removal, wind up taking pieces of paint with it. Although Virginia creeper may be a native plant, it often isn’t one we want growing in our gardens. 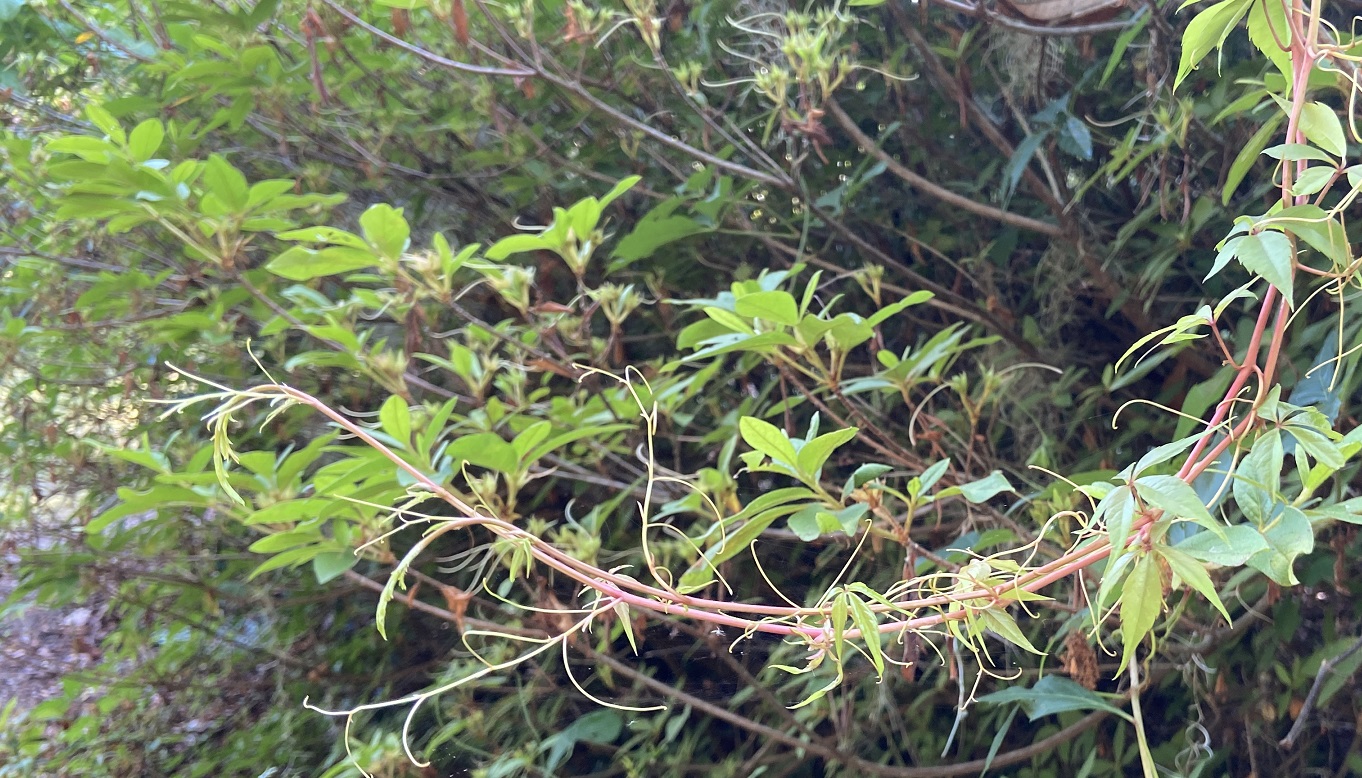 3. Poison Ivy (Toxicodendron radicans)
Poison ivy. Everyone’s heard of it, and many of us have experienced it first hand (or wrist, or forearm…). This weed is definitely one we do not want in the garden. While weeds are obviously annoying for the sheer fact of how they undesirably alter our garden plans, no one wants one that will also leave you with an itchy rash for a couple weeks either! 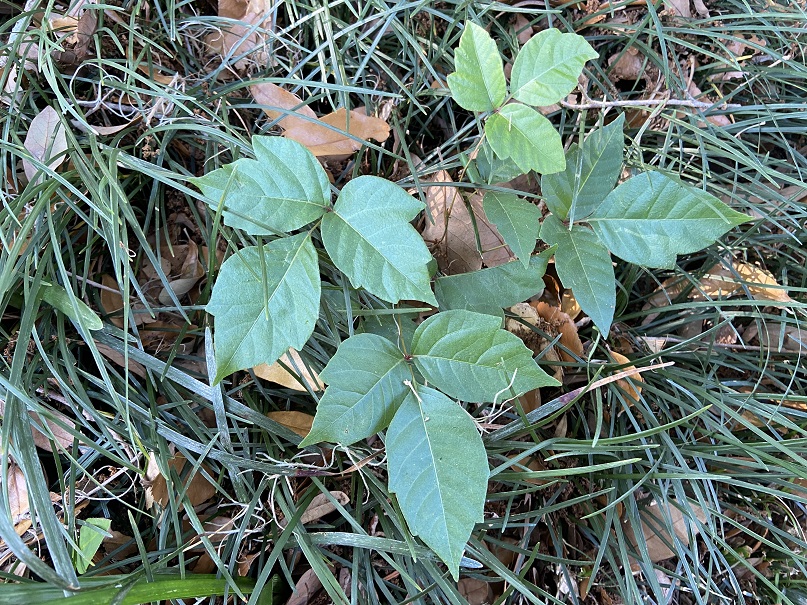 Like Virginia creeper, poison ivy is a vine. It is recognized by its three leaflets that are sharply toothed. Some people say the leaves are shiny, but I’ve never quite considered them to be, and instead have focused on committing the leaf shape to memory. While the leaf shape certainly bears a resemblance to Virginia creeper, it's helpful to keep in mind the infamous saying: "leaves of three, let them be"! 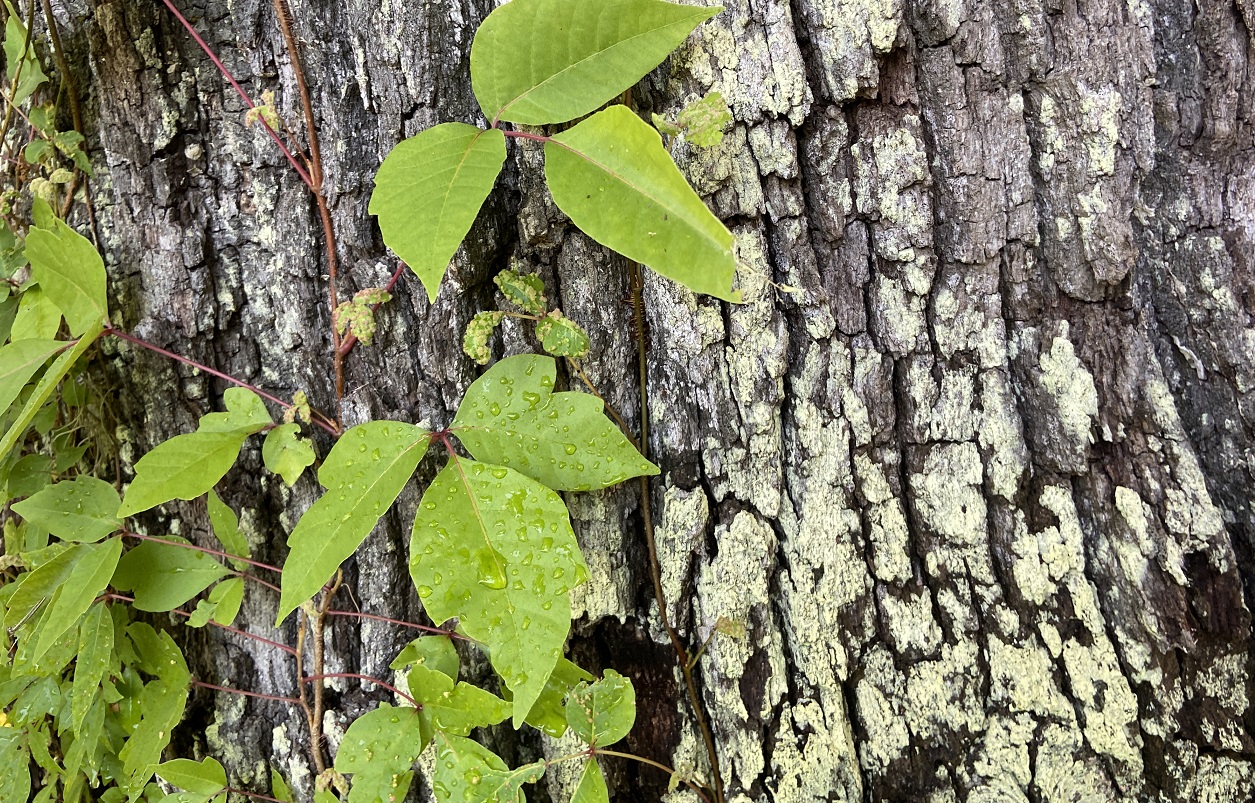 4. Dollarweed (Hydrocotyle spp.)
If you have never seen this weed before, then consider yourself lucky. If you have, then you know what a pain it is! Dollarweed looks like a neat plant with a unique umbrella-like leaf. It looks similar to nasturtium, an attractive cool season plant. Unfortunately, unlike nasturtium, you do not want dollarweed anywhere near your garden. 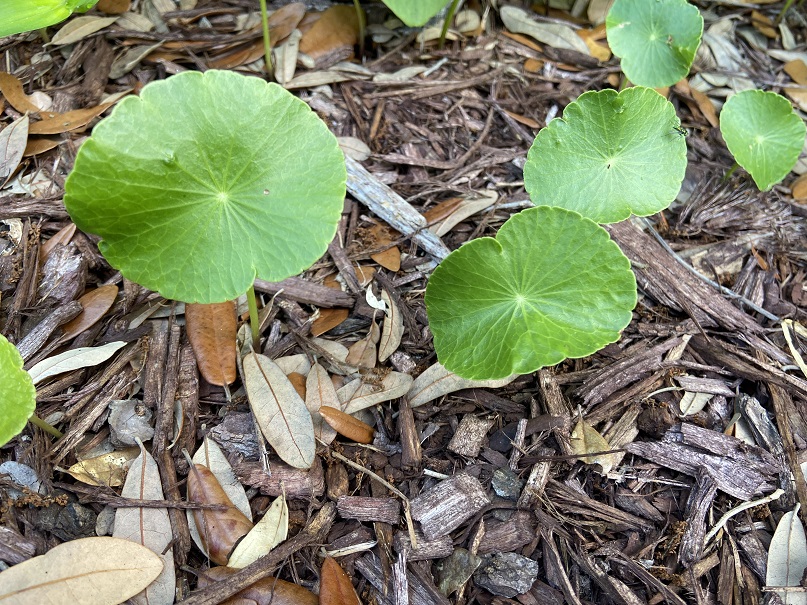 This is one tough weed to get a handle on! This plant is rhizomatous, which means it has an underground stem, as pictured below, that travels sneakily through the ground and pops up all over the place. In order to eradicate it, you need to remove all of the rhizome, which of course easily breaks when you attempt to pull it. Go figure. 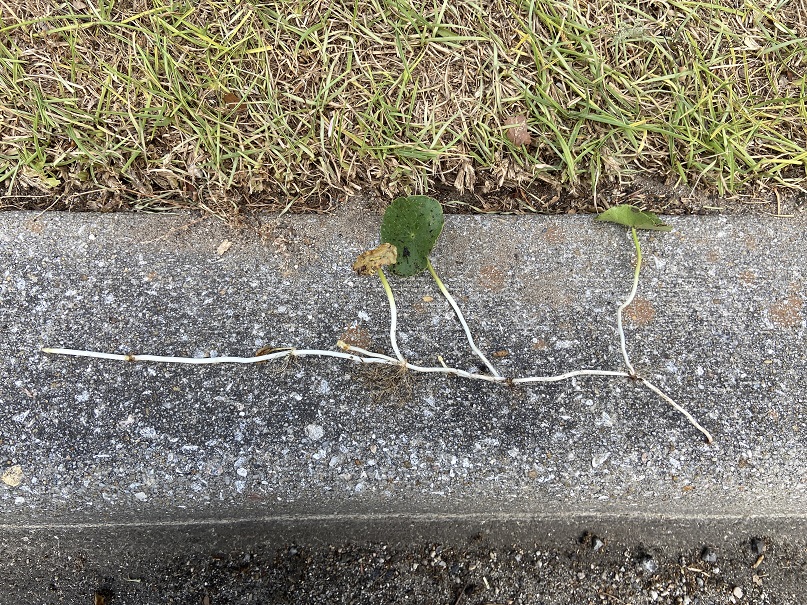 5. Chamberbitter (Phyllanthus urinaria)
Usually I find myself grappling with determining which plants I like best, but with this post, I’m struggling to decide which weed I hate the most! Honestly, I think chamberbitter may take the cake. This weed is often confused for young mimosa trees (Albizia julibrissin) or powderpuff (Mimosa strigillosa). 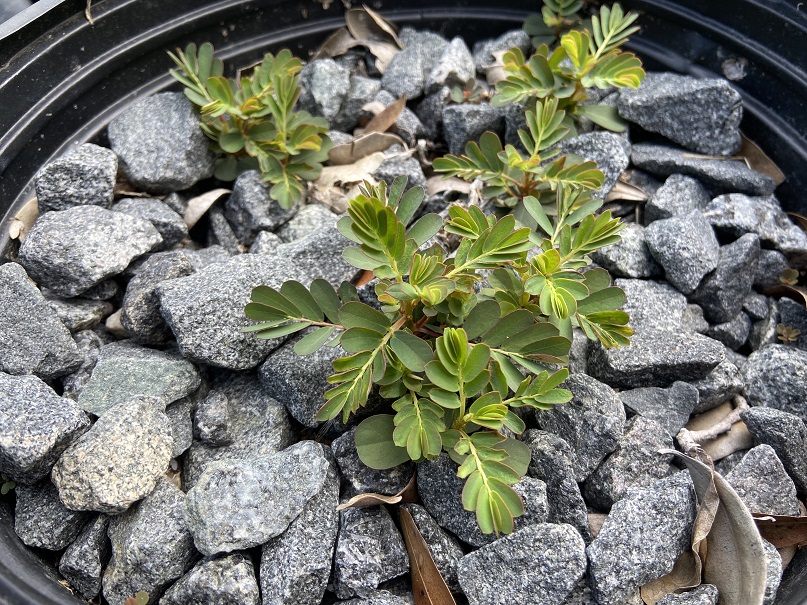 The reason this weed is arguably at the top of my “Worst Plants Ever List” is due to how prolifically it can reproduce. Hidden beneath its many leaves are tons of round, little seeds, shown in the image below. Usually when I weed, I tend to shake off the soil from the roots – not so in the case of chamberbitter! The seeds are so plentiful that I don’t dare to shake any more of them off into the soil. My best recommendation? Pick up ‘em while they’re young - before they go to seed! 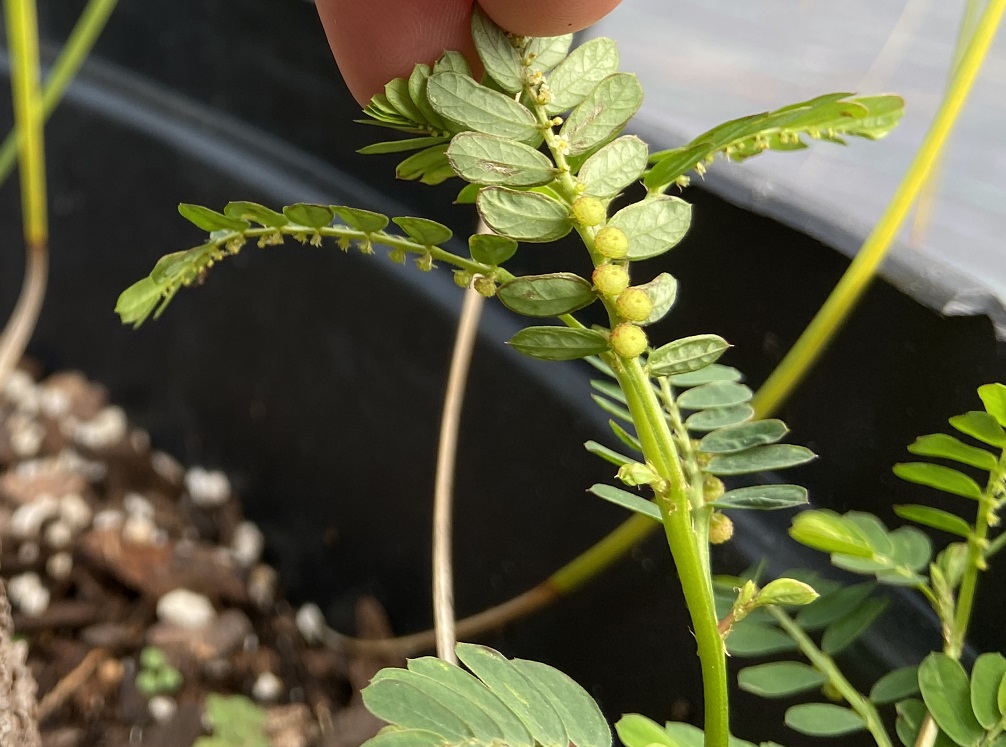 6. Mulberry Weed (Fatoua villosa)
Mulberry weed, at least in my book, is almost as bad as chamberbitter. Mulberry weed has a natural ability to blend in with many different plantings. With its ovate to cordate (heart shaped) leaf form and its dull green color, the leaves of this plant are pretty common and easy to overlook. Its ability to camouflage with surrounding plantings, as seen in the image below, is what makes it so successful as a weed, and thus prevalent in the garden. In many cases, it seems to evade detection until it has grown large… And therefore likely already spread its seeds about the garden for years to come. 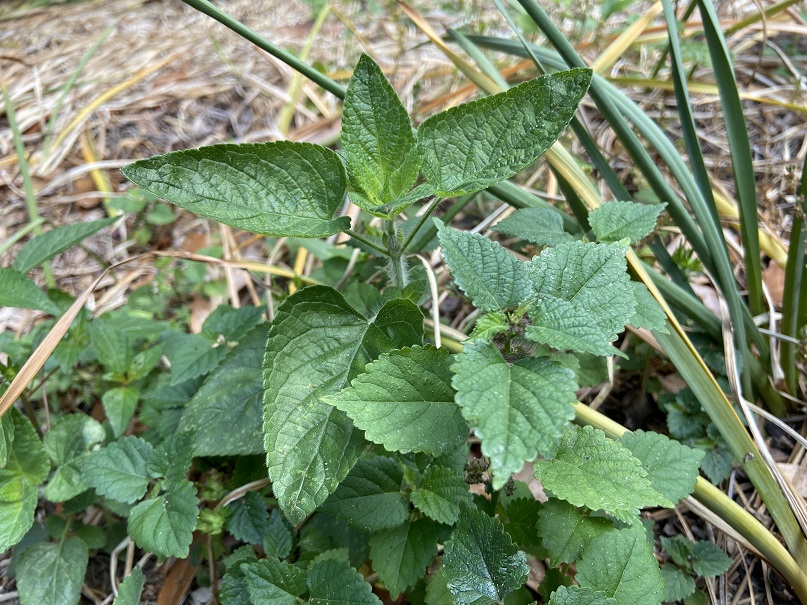 Another annoying aspect of this weed, other than the sheer fact that it’s a weed, is its “sticky” quality. When I’m pulling these out in the gardens, I sometimes feel like I end up with more weeds stuck to my glove than in my weed bucket. While you may be thinking it’s because of my magnetic personality, the truth is that this plant has hooked hairs on its stem that is likely the real culprit. 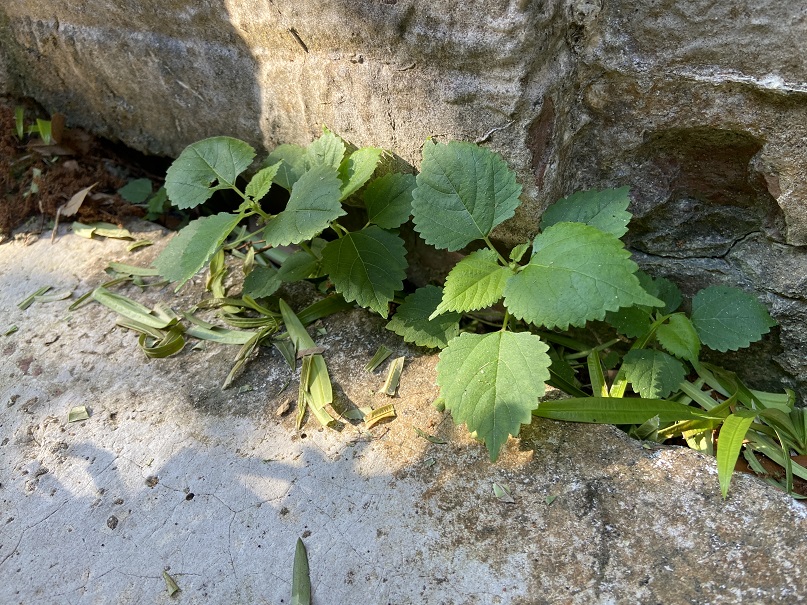 Controlling Weeds in Your Garden
So how can you combat weeds in your own garden? My strategy is typically a combination of hand pulling, and applying mulch. As we discussed previously, mulch is a great weed suppressant and cuts out some of the weeding work for us by making it difficult for weed seeds to germinate under all that ground cover. Chemical options (herbicide) also exist, such as Roundup®, which can be used to kill weeds that have already emerged in your garden, and Preen, that can be used to prevent weed seeds from germinating and thus not emerge at all. As with any chemical option, always be sure to read the entire label so you are applying both correctly, and safely. Happy weeding, everyone!

See you in the Gardens!